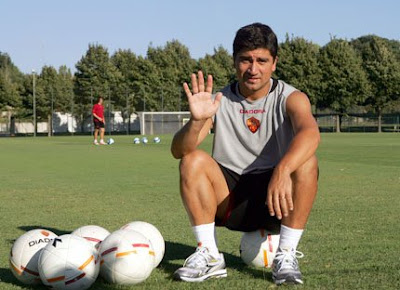 One of the more underrated players in the world for many years now.

With great range of passing and intelligent decision making Pizarro brings effective distribution to whatever midfield he is part of.

His diagonal passes especially are impressive and when under pressure in his own half he has the composure and ball control to win himself time for another good pass.

Usually a deep lying playmaker he is capable of both a slower secure short passing game aiming for control and longer more direct passes aiming for transition.

His team work in both the offensive and defensive departments are exemplary and if this starts to sound like a player who could be even higher, well maybe he could(!) but everyone else now are excellent too or offer something really important, and he does have athletic limitations (that very few players still to come will have) manifesting themselves in perhaps not being fast or strong enough to one; be great in the final third where there is less space, and two; defensively be a very good player, despite his good work rate and positioning meaning he can certainly defend when sitting deep. But he isn't a complete defensive player....

Yes it's all very harsh indeed.
I could just turn it around into something positive instead, cause it's still more strengths (just not to the extent that it could mean say jumping 15 places higher) than weaknesses and all part of the excellent midfield package that makes him the highest ranked midfielder so far.