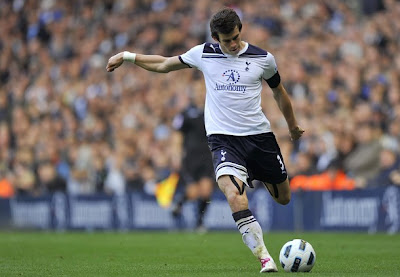 Elite power and pace both when it comes to his running and his kicking, continues to be Bale's main strengths and what has made him a main-stay top 40 player in the world on this list.

These days where most of the best wide players are cutting inside from the right wing with their strong left-foot or from the left with their strong right-foot, Bale is something of a marvel in that he has so much power in his running and in his kicking of the football that even when it comes to scoring, meaning not just making blistering deliveries, his left-leg coming from the left is indeed a serious scoring threat which I think speak volumes of the kind of explosive power and venom that this superb athletic specimen is able to generate.

It's still too much classic, in the current football climate arguably to a fault, winger one-dimensionalism that stops him climbing higher up the list. Bale is fantastic when he can be direct but this high up the list the competition will often have more to their game. It is possible we're seeing small improvements though. Last season, for the first time Bale didn't average just below 30 passes per game but upped his total to 40 passes per game, indicating more touches and involvement than just the one-speed-go up and down the touchline as much and fast as you can, and while this is still new and uncertain, sometimes not very natural looking if you compare him to talented playmakers,  I do think possibly we've been seeing more intelligent, composed, if you will, varied play from Bale including in smaller spaces more central on the pitch and if he can also use his speed and great engine to also be more (and maybe we're seeing a little already) of a scoring threat off-the ball (on it he can create a shot at will almost) then that  might be enough to take another step up the ranking.

Defensively I think Bale has a lot of potential. So far his impressive engine has allowed him to hold his own in often quite frankly wild back and forth games in the Redknapp-era featuring plenty player-freedom tactically (to be fair definitely not a bad environment for Bale to shine). There is no doubt Bale uses incredible energy when he is marauding forward, the kind that few players posses, and in that context it's actually impressive that he has not been a total liability defensively. He is able to track back pretty good but where it would get really interesting was if he could (given the tactical opportunity) put that incredible physical capability into defending higher up the pitch in the form and structure of much more counter-pressing opponents. Use those gifts not play catch-up and be reactive, even if you're able to, but be pro-active, aggressive and dominate.
It's no doubt something the new manager at Tottenham Villas-Boas have on his mind, even it is still mostly dreaming and obviously something that's bigger, more complex than just one suited player and at the time of writing Tottenham as a team (player characteristics and injuries) probably isn't there yet. You can't blame Villas-Boas either if this time he will be determined to carefully avoid forcing a quick overhaul like previously at Chelsea.

Turns out that the Spurs sensation's 2009/2010 explosion was somehow only the warm up.

This season Bale has rocketed for the stars even higher with dominating displays from the wing.

Bale has tremendous power that goes with his blistering pace to create the kind of terror-balance that can make him almost untouchable for opposing defenders.

Just how high he should be ranked among the best in the world, is a question I think many are asking themselves these days?

Well, I'm going to show some restraint for now at least and hold him back somewhat using the reason that is some winger-one-dimensionalism in his game.

One-dimensionalism that isn't as outspoken I don't think for the comparable players still ranked ahead of him.

Of course if his tremendous, not least physical, tools that he has, continue allowing him to dominate the way that he has, then he should continue his rise soon enough.
Indsendt af Stefan kl. 22.21