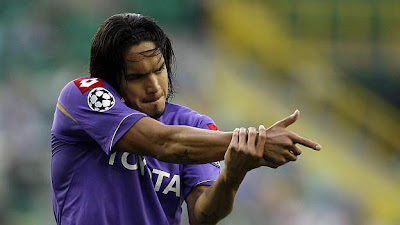 Like many other Fiorentina players the 2011/12 season was a nightmare to forget for Vargas who had his worst season so far in Italy. The bad news is that the move to Genoa doesn't look to have improved anything at all, and while battling various injuries, Vargas has barely featured for his struggling new team.

Ironically his former team, Fiorentina, who are completely transformed this season with one interesting player after another put into the kind of tactical and stylistic South American feel to it lineups Serie A hasn't seen in years by arguably the most promising Italian coach, former expert-poacher,  Vincenzo Montella, has a left-wing-back weak-spot where the only outfield Italian regular Pasquale tries admirably, but where a healthy Vargas would now have been a great fit (and upgrade) with a real chance to resurrect his stumbling career.

Instead Vargas is likely on the decline and with it the days of frequently being linked to big clubs all but over and I think he will be close to the exit, if not gone entirely, on the 2012/13 mid-season ranking.

After being moved from left-back to left-wing before last season, giving him more attacking freedom he really broke through and is still regularly put in connection with big clubs, not least Real Madrid.

He is pretty fast, really strong and works very hard both on the attack and when defending.

His left foot is capable of some of the hardest deliveries known to man and obviously with that kind of thunder in his boots, the shooting ain't too bad either.
I've also witnessed some impressive accurate long range passes coming from him. His short passing game on the other hand, doesn't really stand out as anything special.

Even though he has good enough control to maintain nice speed with the ball at his feet when on the move, he isn't really the kind of winger well capable of dribbling past opposing backs using flair, he will get his great deliveries in consistently though still making him effective.

Being a good left-back as well puts him just ahead of another very effective hard working winger like Valencia (who has more upside though) and even if Vargas isn't quite as fast, his defending sets him apart.
Indsendt af Stefan kl. 18.53