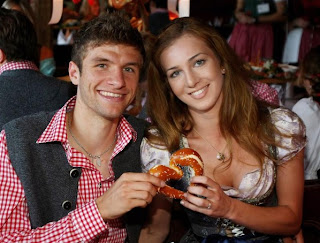 Before the 2012/13 season where Bayern are currently looking excellent, my favorite recent Bayern period was when in the Bundesliga winning 2009/10 season then coach Van Gaal would play a very flexible front four of Olic (whenever Ribery was injured but the Frenchman was also fine), Müller, Robben and Klose. Behind them in a midfield tandem Van Bommel and the re-innovated Bastian Schweinsteiger ruled. Gomez? He was mostly on the bench and the overall result was some wonderful fluid football bringing the best out of everyone's characteristics, and of course, they actually won something too.

Reading it again it looks like I already somewhat touched upon it down below in the 2011/2012 mid-season Müller-comments, but it's now clear that last season just wasn't anything like that. The way Bayern set-up and generally played didn't bring out the best of everyone, least of all Müller who had his worst season so far acting way too much as Gomez (who certainly did enjoy it apart from when he and Bayern were exposed against Dortmund shoving in their faces exactly what they were lacking) personal rather limited water-carrier.

Both Gomez (who at least least made use of it to bomb away) and Robben did a terrible job of occupying Müller's space and limiting him to the one place on the pitch where he is least effective. You only have to look at this season and what new striker Mandzukic different movements and nothing short of exemplary teamwork compared to Gomez, has done for Müller's game, to realize that in comparison last season's Bayern make-up just wasn't ideal for Müller to keep shining on.

There is plenty of praise and description of the many admirable Müller characteristics in the various yearly installments further down the entry, but it should also be said that with his quickness, anticipation, freak-strength and stamina he is also all you could ever wish for in an attacking player defensively, someone quite simply made for effective ball-pressure (gegenpressing, counterpressing) providing real value for his team defensively as well.

He still didn't show any signs of slowing down last season following his great 2009/10 breakthrough. It's now perfectly clear that this is one very durable player, and I think perhaps it is only a healthy Robben, even when constantly cutting inside and all, still inevitably forcing Müller more central, where there is less space for his pace to eat up, and instead increased demand for technical ability, that can at least reduce his effectiveness somewhat.

There is still his great movement though, and in between Gomez occupying space ahead of him central, and Robben dragging defenders with him cutting inside, Müller will still find space to exploit with his runs no matter where it is, and his anticipation for getting to chances, including in the penalty area, is close to phenomenal.

More than great skills with the ball, where most this high up the list will be better, Müller score and create all the goals that he does with a combination of great sprinting (the sheer amount he can perform), outstanding teamwork and some uncanny anticipation. 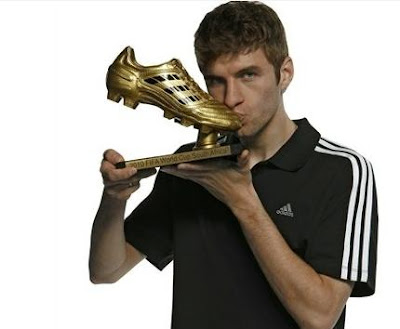 Entering the 2010/11 season for Bayern things haven't been going quite as smoothly so far but personally I'm more convinced of his qualities than ever and eventual weaknesses are getting harder to spot all the time.

I think I'm even seeing new strong points when it comes to Müller. Now rather than almost exclusively complementing players around him (and doing it superbly) not least through off the ball movement (those relentless sprints!), he now also looks capable of creating with the ball, and not just the piercing runs but through effective passing as well. Including some range.

In my mind, the rise of Müller shows no signs of stopping.

Tall 20 year old athletic freak who must be a dream to have on a football team. Müller can play several positions well and combines superb work-rate, attacking and defending, team work and quick movement to make him already one of the best players in the world without the ball. There I said it.

He'll operate effectively anywhere in the final third and with his prolific pace and constant movement and ability to perform one fast sprint after another throughout 90 minutes makes him very difficult to properly mark.

With the ball he is a little more inconsistent (or how scary would he be?). On the wing he definitely has the ability (and agility) to make piercing runs with it at great speed, or if central the ability to perform quick turns once he gets it shielding the ball, but will at times fail to control passes that look rather simple.
My perhaps incorrect theory is that he is often very ambitious with his first touch and that will make him look below par sometimes. No matter what it is though, subpar technique, great ambition or poor decisions, improvements can definitely be made. But make no mistake about it, this is already an excellent player. One who sooner rather than later will have a good case for an even higher ranking.
Indsendt af Stefan kl. 21.11