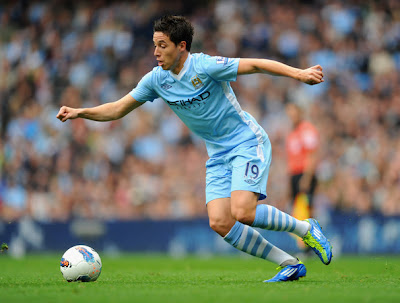 Looking back Nasri's rise all the way up to the number 21 place following his 2010/11 season was too dramatic and quite simply it was a period of sensational form that he hasn't been able to replicate since. Certainly not over a longer period. And maybe never will?

That season he finished 6th in the league in successful dribbles averaging 2 per game. Up from 1.6 the season before (last season the 11/12 he finished at just 0.8) and most importantly turned that great looking flair into brilliant individual goals and real playmaking. Quite simply the kind of decisiveness you associate with an elite player, but absolutely, in retrospect I should have shown a little bit more restraint from automatically translating that very (brilliant) spell of form into Nasri's true level as a player.

So what is truth about him? One interesting thing I noticed when looking at his various OPTA numbers was that in both 2009/10 and 2010/11 where he was respectively 13th and 6th in successful dribbles per game in the league, he was very rarely fouled compared to other top 30 dribblers.  In fact of the 60 players and their respective seasons making up if you will those two top 30s, only Ryan Giggs in 2010/11 was fouled less! Then if you look at last season where his 0.8 dribbles per game is only good for modest 56th in the league, in the top 60 only Gabriel Obertan is fouled less, while Ryan Giggs once again is similar sharing Nasri's getting-fouled-rate at just 0.5 per game.

Now someone reading this might think, that's a good thing and it somehow speaks to his advantage as a player (he is not a diver bla bla) but getting fouls must be good. For starters freekicks are dangerous, Nasri himself is pretty good at creating chances from them, and generally I think the getting-fouled statistic is one of the best (most real most reliable) indicators of what attacking players give the opposition problems. Who are difficult to control if you will, certainly indicating a player who is threatening.

Of course context is everything and naturally a goalscorer of the poacher-box-type will see less fouls simply because of where he will have the ball the relative few times that he does and then there are also those few (in fact perhaps just Messi and he is still fouled much more than Nasri) who are so brilliant that they are able to shrug off fouls and consistently manage to become even more dangerous staying on their feet.
In fact I actually do think Nasri himself has very good balance and close control with some underrated strength when he's got the ball (protecting it) but overall I do think his abnormal low getting-fouled-rate compared to so many others raises some questions about how threatening he really is individually with the ball at his feet. Even if it's something that doesn't takes away from what we know about him, that he can thrive in small spaces with skillful touches and passes (he has always been one of the most accurate in the league) and that he can assist or provide the finishing touch on delicate goalscoring (combination) moves, it still hurts him when comparing him to attacking players further up the list, even if all it really means is that he lacks pace over more meters than just the first few and can't take advantage of, or create bigger space, for himself so to speak.

Nasri's teamwork is something that has always puzzled me. I thought he generally did well and used his characteristics for the benefit of the team for Arsenal in the Fabregas-possession-years. There is no doubt Nasri enjoys the ball and won't mind grabbing responsibility.  You can't really criticize his short-passing game but in central midfield, and deeper when grabbing buildup responsibility like he sometimes does, including for France, I haven't been a big fan of his work or even found his contributions very helpful to his team, and it seems he needs a Silva or Fabregas to get over a hurdle of predictability and too often sheer nothingness. He will be part of ball-retention sure but he is not a particular good, creative or constructive distributor in deeper midfield and very rarely, whether it's horizontal or vertical, execute longer passes. It's hard to imagine it's anything technique related, even if he is not a specialist in that area, so I'm guessing it's something mental (football intelligence/tactical) related.

Without the ball Nasri seemingly has what it takes to counter-press well. Even if his stamina isn't the greatest, and I'm not even sure about that to be honest but it's definitely not an outright weakness or anything.
I do believe he has the physical tools to provide value and has done so as well for periods over the years but again it's been too inconsistent and whether it's ball-pressing or more reactive defensive positioning Nasri does have something of a bad record of not providing enough to team-defense. Even being a negative. A liability. I strongly suspect it's been poor mentality a lot of the time, but even if I'm totally wrong and instead it's physical, it's something that should definitely improve when you look at the countless of good (and comparable) attacking players in today's game that also provide consistent value defensively.  The best examples of course, and take your pick, being so many of the Spanish players on this list.

Well, the last line of the 2009/10 season writeup below sums it up rather nicely and Nasri have of course delivered hugely when it comes to those things this season, making his rise up the list dramatic. 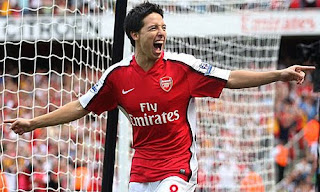 Nasri is one of the players seeing the most swings in rank on this list having been ranked something like at least 20 places lower and also as much as 30 places higher.

For much of the season once again I wasn't really that impressed with Nasri game in and game out, his consistency, but at some point during the second half of the season he really started to make his mark on the team, and at times in the injured Fabgregas absence, even making it his own with performances suggesting a much higher ranking. But whether it's the surroundings fault or not, then following that great spell Nasri kind of fizzled out once again and I don't think you can say yet that he's really made his mark in the Premier League. At least not to the degree that his great talent arguably suggests that he should.

Nasri has well known impressive technical skills including being a good passer of the ball and has ball control with enough agility to be a good dribbler in small apces. He has good acceleration on the first few meters and I think his work-rate is underrated.
Fitting Arsenal he is comfortable central, functioning well even in narrow conditions displaying what is vital for Wenger's vision, some very good ball retention skills on and off the ball, while on the wing he perhaps isn't the most effective so far.

His superior technical skills put him ahead of quite a few better performers this season and whether it's with or without Fabregas playing alongside him, he deserves some credit for his part in Arsenal still being able to enforce their style against the large majority of teams on their way to third place behind Chelsea and Manchester United, where remember, they were close much of the way, but overall I'm still missing that great spell of difference-making effectiveness that's required to really catapult Nasri up the rankings.