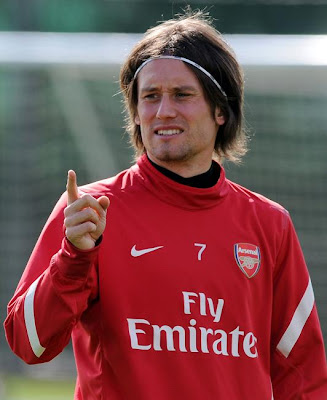 This was the most Tomas Rosicky played for Arsenal since his first season way back in 2006/07 and he makes a modest comeback on the list.

He is a player who of course has been plagued by injuries throughout his career. The worst when he missed the entire 2008/09 season but even before that, and after, injuries has often meant continuous struggling finding prolonged form over a full season. When at his best he's been an excellent player, often for the national team, but looking all the way back to when he became, at that point the Bundesliga's most expensive player ever, signing for Dortmund in 2001, you expected more and unfortunately it's probably fair to say that "Little Mozart" has never really been able to fully live up to his great talent and become one of the best players in the world.


Tomas Rosicky has the kind of fine technique and clever movement where he can excel in smaller spaces under pressure. When at his best, not least physically, allowing for greater activity, more movement, he is so good he can dictate a game or even create with some fine passing, including a nice through-ball, when he is not however, and that's been the case too much, everything is less, there is certainly not much dictating, it's more in spurts, and unlike a whole new generation of excellent small-space players (think all the current great attacking Spain midfielders) he won't have the physical capabilities to consistently execute effective ball pressure higher up the pitch when possession is lost and any tracking back also becomes a serious physical challenge, in other words he is struggling with positive contributions to defense, the very kind that his type of player almost has to have in their arsenal in current football if they want to be counted among the elite, overall then in my opinion reducing current Rosicky's value to a team significantly
Indsendt af Stefan kl. 18.42