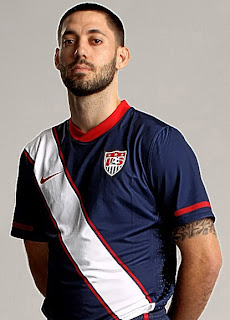 That was a great season from Dempsey and he is rewarded with his best ever ranking.

In many ways his role at Fulham is tailor made for him and this season (Zamora not around anymore) he was clearly the centerpiece of their attack. He did that so well that a long awaited chance at a bigger club is closer than ever. The question is if being a star for Fulham and around 200 on this list is his limit or if he can produce at a high level for a better team? I think he has at least earned the chance to prove it.

I will claim that Dempsey is one of the more limited players on the list when it comes to passing and technique. Personally when I watch him my impression is of someone without good ideas in his passing game. Fortunately he has other qualities.

But actually looking at it, his passing percentage, with a similar number of touches, have gone up this season from a low 74 to 82 percent but a lot of that is decided by where he spends more time on the pitch (players with touches where space is most narrow will always suffer) and of course it's also possible that Fulham under Martin Jol keeps it a little bit more on the ground than what they did under previous managers.

What would indicate I'm right about his limitations, is the number of times he is dispossessed or turns it over. Players who dribble a lot (Dempsey doesn't) will see their numbers rise in those areas but Dempsey at 0.6 dribbles is dispossessed 2.1 times per game and turns it over 2.3 leading his team. I'm fairly confident those are high numbers. Last season they were worse at 2.3 and 3.0 respectively.

Dempsey however is also the most fouled player on his team indicating that he is indeed threatening opponents (the impressive number of goals he scores being the obvious proof of course) and I do think what he perhaps lack in excellent technique (he is obviously not bad or anything, in fact isn't his first touch rather good?) he makes up for with very good strong aggressive movement without the ball and just sheer intelligent and insistent opportunism. For an example his 4 shots on goal per game (up from 2.7 last season) does seem pretty amazing for someone running (successfully) so little with the ball and posses no great pace that he can use as a weapon, with or without the ball.

Dempsey is intelligent. A hard worker who knows where to be for the benefit of his team and when he is there has effective ability to score with both head and feet.
Indsendt af Stefan kl. 14.54