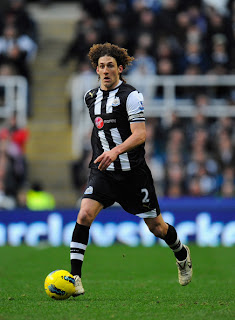 In previous years I remember having the impression that Coloccini was far from solid and pretty mistake prone overall, both for club and for country but I think certainly this season, and probably the last one as well, that he has been very good and a distinct leader holding it together defensively for Newcastle.

He is a pretty good footballer who can bring the ball forward. Sweeper style defender with an impressive activity-range, so to speak, of making tackles, interceptions and clearances. Good pace. Good in the air and I'm pretty sure a skilled organizer as well these days, comfortable controlling things both in higher line (defending open space) and deeper (defending tight man on man space) around the area. A defender who can master both is a great positive.

I'm not sure he is elite one on one but he reads the game well and has a lot of impact (again with his efficient defensive activity) helping out what I think is a very suspect defensive bunch surrounding him at Newcastle, so I definitely give him a lot of credit for that.
Indsendt af Stefan kl. 14.46