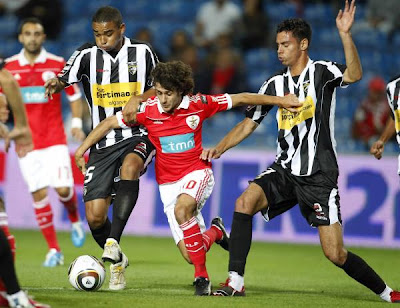 Recently I've been skeptical though mainly when it comes to his physical limitations and how it, depending on how you feel about him, comes into play against top opposition and his effectiveness in those games. In Europe recently, for an example, despite glimpses of his well known brilliance, I really don't think he has been one of Benifca's best players.
Just the other day I watched him get taken off in a high-tempo game against Porto, played at a very high level, because despite all the well known skill, he was seen as more hurting than helping his team. Zonalmarking covered the game comprehensively HERE.

Aimar has excellent ball control and can still change both direction and tempo with the ball at his feet meaning he still has that great gift of being good enough (and creative enough) to make plays in the small spaces under pressure. His beautiful radar for moving the ball to teammates in those small spaces shouldn't go unmentioned either or that his combination of clever movement and stellar technique makes him someone who can receive and control the difficult passes.

All in all then, what remains of him can still perform brilliant, and if I didn't have the impression that's exactly what's been happening mostly during his time in Portugal he wouldn't be on the list, but he is obviously not someone getting younger or better.

In his heyday Aimar was the important creative spark for the Rafael Benitez Valencia side that won two La Liga titles and the Uefa Cup.

Then darker times followed struggling with fitness, but he still had at least one season for Zaragoza where in alliance with compatriots Diego Milito and Andres D'Alessandro under the attacking guidance of Victor Sanchez, where he once again was spellbinding.

Still only 30 a lot of indications suggest that Aimar is having one of those spells or close to it at least once again (but sadly maybe for the last time so this is kinda a reward) at Benfica, this time with players such as Di Maria, Ramirez and Saviola, who currently are showing some of the best attacking football in Europe.

With his great speed and ball control even in the tightest of spaces Aimar is exactly the kind of player who can make such an attack click.

As far as more traditional playmaking ability goes when it comes to passing he is different than Riquelme and Veron, in that he has quicker feet and is such an agile threat moving quickly, that his passing is mostly short and direct in speedy combination attempts with others meant to take advantage of just that.

His obvious weaknesses are everything physical. At similar height Messi for an example is a powerhouse compared to Aimar.
Indsendt af Stefan kl. 15.58