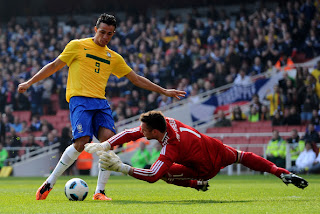 I have now seen quite a bit more of Damiao, including full matches, and to be honest this feels like a very conservative ranking (there are many strikers ahead of him where you would pick Damiao without any hesitation whatsoever) but hopefully the huge jump up the list that I'm sure is right around the corner will make things right.

It's still worth noting that Damiao can look a little bit raw in ways you don't expect the Brazilian number 9 to look with some of his touches, but remember this is a big guy and at this point already his combination of physicality and capability with both feet makes him increasingly difficult to control for defenders. Add to that what seems like knack for clever movement and classic born-striker anticipation and you have a striker right on the verge of becoming scary.

His teamwork also looks good and while not yet on the level of his predecessor Brazilian number 9 Luis Fabiano at his peak, when it comes to (one touch) link up play with all the excellent forward talent always surrounding a Brazil number 9, that is something that looks very promising as well.

If I have one overly premature and pessimistic worry when it comes Damiao which hopefully will be proven silly by never even becoming relevant, it would be some fitness weaknesses down the line. He really is big but hopefully that waistline of his won't develop into a lazy Brazilian attacking star stereotype in Europe ala Adriano, the nightmare example because it happened so early, where as at least the likes of Romario, Ronaldo and Ronaldinho had all spent time being the best players in the world.

Until he makes his move to Europe, where Tottenham due to their business relationship with Internacional still looks like firm favorites to land him, I won't get to see Damiao a lot, but his name has been gaining momentum for a while now, he scores a lot of goals, is starting to enter the Seleção picture, so here he is on the list.

Interestingly described by national team manager Mario Menezes in these terms:
"Leandro Damiao belongs to a rare family of strikers that are hard to find in Brazilian football. You need someone with his strength and penalty area presence,” he certainly looks the part with his tall figure and when that, even from short clips, is to be safely assumed being combined with at least pretty good technical ability, then we're dealing with serious potential.
Indsendt af Stefan kl. 15.07