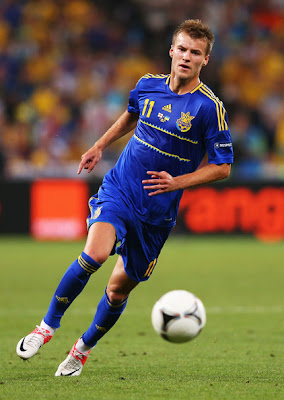 Impressive 22 year old winger who after some delay, has been performing at a high level for some time now and become a star in Ukraine where he was named 2011 player of the year. Not at all unlikely playing at a higher level than this modest debut ranking would indicate, but since I'm not seeing him often I'm choosing caution and for the time being keeping him behind various comparable wingers (some obviously on the way down) who have made strong impact the last couple of years.

Yamalenko is a tall winger and watching him it quickly becomes clear that this is a very physically capable player. He is strong when outduelling fullbacks and when it comes to his engine he can move around and make fast runs all game. From what I've seen he even seems pretty agile.

Technically his left-foot is very good and it has made him into a dangerous scoring threat coming in strong and fast from the right-wing. He has been in double figures the last two seasons for Kiev and not surprisingly been referred to as the "Ukrainian Robben".
However his right foot doesn't look bad either, also giving him with the option to go the other way, providing defenders with even more headaches. He also seems like quite the intelligent player, making good decisions and generally doing what's best for the team, including defensively.

For the Ukraine national team he is able to provide opponents with different challenges switching sides throughout a game with another good looking rising Ukrainian winger Konoplianka (who might very well also be on the list soon) who will usually start on the left.
Indsendt af Stefan kl. 18.54