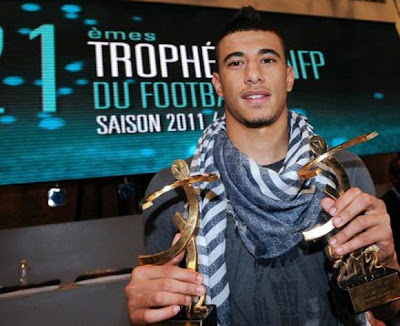 Belhanda had his big breakthrough being a key player in Montpellier's very surprising championship win in France. Having said that I can't help thinking that this ranking might be too much of a good thing too early and instead I should have debuted him lower.

That aside, what impresses me most about Belhanda when watching him playing for Montpellier is his very stellar combination of technique and anticipation. Very often he knows exactly what will happen before it does and gets the best out of situations with very impressive first and second touches whether it's the impressive tactical dribble or nice passes, horizontal or vertical.

He is often mentioned as Montpellier's playmaker and that's not wrong (he certainly makes plays) but he is not the kind with an overwhelming number of passes, conducting, retaining or building possession. In fact two other midfielders for Montpellier had more passes per game than him. But he is the one with the fine technique and inspiration to be decisive creating openings (whether for himself or teammates) or just taking advantage of them the best, often in the final third where his chemestry with goalgetter Giroud was excellent, and often in a very direct manner making him very effective.

I also think  that Belhanda looks like a good athlete. When it comes to defending his stats don't indicate great activity, but that might not say much depending on plenty of things, and I'm really most interested in how good he is at pressing immediately when possession is lost, the effectiveness of his pressing in general or if he is just more of a limited tracking back into defensive shape type of player. Those are the kind of things that I'm guessing will help determine his next ranking.

He was the 15th most fouled player in the league.
Indsendt af Stefan kl. 17.38