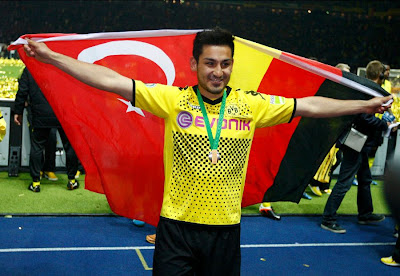 I think 21 year old Gündogan can be excused for his uneven start at champions Dortmund in 2011.

He had shown a lot of talent at Nürnberg the season before so when Dortmund lost Nuri Sahin to Real Madrid, coach Klopp decided Gündogan was the right man to replace him. Sahin had been Dortmund's, and arguably the league's, best player that season meaning Gündogan had very big shoes to fill.

Then when you consider that at Nürnberg he had actually been more of an attacking midfielder and now he was put into the huge and very different role, where Klopp saw his potential, of distributing deeper in midfield, seeing many more touches, facing more decisions, the place where Sahin had been a brilliant deep-lying playmaker.

Gündogan was definitely struggling early on, too vulnerable when targeted by opponent ball-pressure and not making great decisions building play or let alone making plays further back than he was used to create, trying to be an important part of Dortmund much feared transition game.

Things got better though and after the winter-break he stepped up when desperately needed (defensive midfielder Bender was out with injury) playing at a high level alongside veteran Sebastian Kehl making a nice comeback after his injury-nightmare, establishing himself as an integral part of the Dortmund midfield with very skillful touches, passing and intelligence.

Compared to Nürnberg he went from 29 passes a game to 48 at Dortmund. He even managed an average of 2.2 dribbles a game which made him the only central midfielder in the Bundesliga top 20 in that department and crucially he showed he could also contribute defensively in central midfield and in Dortmund's highly aggressive team-defense, indicated by him more than doubling his average interceptions and tackles compared to his breakthrough at Nürnberg going from 1.2 and 1.1 tackles and interceptions to 2.8 and 2.3 respectively.

You can't really say he was an elite deep-lying playmaker like Sahin had been, but a little bit less than that is certainly not bad either, in fact it's very good in its own right, and skillful midfield distributors, who will even contribute defensively, which is exactly what Gündogan is busy establishing himself as, will have very good rankings on this list. The only way for Gündogan is up I think. Way up.
Indsendt af Stefan kl. 18.31