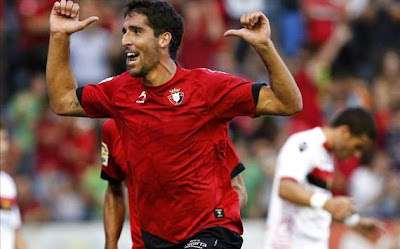 Raul Garcia had always had a lot of all-round midfield talent, technical as well as physical, for Spain he was something of a star at U-21 level, but for what had amassed to a couple of years quickly he just wasn't making it happen at Atletico Madrid and his career was going seriously stale.

The answer turned out to be a season long loan-deal to his early home Osasuna, the place where he had first broken through (leading them to the UEFA Cup semifinal back in 2007) and of course made Atletico Madrid pay good money for his services.

Now back at Osasuna 2011/12 he became something of a talismanic presence once again, contributing in many ways from midfield. With his great kicking-technique and knack for seeing the right openings he created goals for himself and others both in open play and on set-pieces (where Osasuna was 3rd best in the league with 19 goals overall) tallying 11 goals (Garcia was Osasuna's top scorer) and 8 assists (where only Navas and Castro were better outside Real Madrid and Barcelona)  being instrumental leading Osasuna to an impressive 7th place finish.

Raul Garcia is also very active battling in midfield in duel play phases of the game. He is physically strong and there are definitely some spoiler qualities in place as well being in the La Liga top 5 when it comes to fouls committed averaging 2.4 per game.

One way that he was utilized at Osasuna this season, which I don't remember seeing with any consistency previously for Atletico Madrid, was in aerial play where he was both an effective playing- station further up the pitch and with his head scored some goals as well. All in all his 3.3 headers won per game was the 4th best in the league.

2012/13 he is back in Madrid and can once again experience midfield starts hard to find. In many ways however I do think he is someone who should be to coach Diego Simeone's liking, for starters his characteristic made perhaps the most direct-playing team in the league, as well as one of the more physical (Osasuna), last season a lot better, all in all that's also the direction of Diego Simeone, unfortunately though for Garcia the Atletico Madrid central midfield duo of Gabi and Mario Suarez has been superb for a while now and for the more attacking roles behind or around fantastic striker-stud Falcao there are more obvious choices as well.