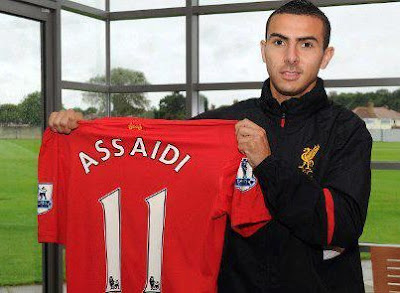 If I'm allowed one so called youtube player on the list, Assaidi, for the time being, is that player.
I have not watched him for any full game at Heerenveen but among, what sometimes can seem as countless of worthy candidates for the lower rankings on the list with very little between them, and that's even more the case when it comes to those you're not overly familiar with, he was probably the most interesting, in the end, mostly up against some other wingers from last season's Eredivisie that I wasn't overly familiar with either.

One of those, who I'm starting to suspect could be the best of the bunch, Ola John has moved to Benfica who usually judge quality very well. Another, the assist king in Holland last season and therefore perhaps the safest choice (and until I learned more about his teammate Assaidi also the original one) Luciano Narsingh has upgraded Heerenveen to PSV and  then Assaidi of course, who with rumors about Turkish and Russian clubs, was somewhat out of the blue suddenly signed by none other than Liverpool.

Something again, not least due to lack of evidence, doesn't make me unhappy about picking Assaidi over so many others. Of course what really counts, actually seeing and analyzing the player, is still to come since, at the time of writing, he is yet to feature for Liverpool.
Indsendt af Stefan kl. 17.35