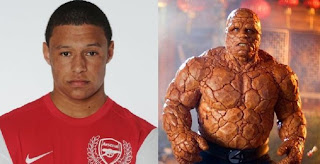 Like quite a few other, to various extents, sensations before him, he is tough to rank with only a few games at this high level below his belt.

If I had I followed him in the Championship (a good league in its own right) I would probably lean towards catapulting him higher.

Let me say immediately though, that there have been quite the cleanup when it comes to attacking English players (including wingers and Oxlade-Chamberlain is already one of the highest ranked. Any talk about him being a good candidate for EURO 2012 selection already, is not outlandish thinking at all.

My first impression of Oxlade Chamberlain was a sort of a mini winger-version of the young Everton-Rooney. I think years go by between such comparisons. It's pretty unique. The Ox is quite simply build like a small truck and have enough power and pace to be a real impact player in years to come.

When you then add, that he has already shown his arsenal to consist of more football intelligence and more varied skill repertoire, than many other UK wingers showcase in a lifetime, then you realize that here is a very special talent.
Indsendt af Stefan kl. 05.18