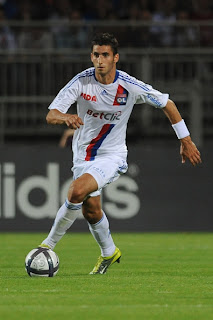 I definitely tried to avoid getting more Lyon players on the list when they're not even that good in Ligue 1 at the moment, Gonalons however has become a little bit too good to completely ignore.

He is very composed and efficient in central midfield when it comes to the defensive stuff. Tactially it doesn't look he sets his feet wrong a lot, I don't want to go overboard and claim ever, and with the ball his very confident and reliable range of passing makes him stand out from so many other solid midfielders. A valuable quality like swinging the ball diagonal to wingers is not a problem for this particular player.

At 22 ( and with Toulalon gone to Spain) this is his first as a certain starter but he already looks like someone with a lot more experience than what you actually see on his resume.

Maybe there is a problem when him and (mentor?) Källström are getting too similar(?) with what they do in central midfield both with and without the ball, I like watching them for sure, but isn't what we're seeing almost identical impact coming from two different players, and isn't some kind of different impact being made from those positions missing then?

Well, that was just something I thought of right now and to be fair Källström being the veteran does try to take more responsibility and sometimes make different kind of impact, do whatever is missing out there in the heat of battle to the best of his capabilities from his position, I do think he is still enough of an all round midfielder to do so, and like with the passing, where Gonalons has truly followed in the Swede's footsteps, you can hope for Gonalons that also adding different impact and taking more responsibility is only a matter of time.
Indsendt af Stefan kl. 06.03