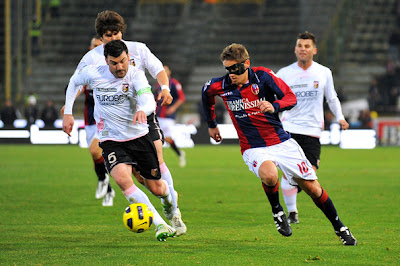 Overall I would say Ramirez playmaking is still inconsistent. Maybe a little bit too much for this jump up the list. He is clearly a talented difference-maker though and when you can add intangibles like a very good work-rate, apparent hunger to succeed, you have a very promising player.

Maybe he is trying to do too much sometimes though? Of Serie A players you can categorize as attacking midfielders, only two fouled more than Ramirez. One of them Kevin Prince Boateng. If my guess is correct, that moreso than with Kevin-Prince the fouls are less misguided aggression and more hard intentions (following the example of Bologna soldiers Perez and Mudangayi) when it comes to defensive work (and his interceptions, tackles and clearances being above Boateng would at least indicate such) then it might not be such a bad sign after all.

Offensively he stayed in the top 5 in successful dribbles (2.5 per game, Cuadrado, Jovetic, Biabiny, Lavezzi) and he competed with the likes of Marek Hamsik and Antonio Nocerino (great off-the ball movers into the area) when it comes to needing less than two shots on target per game for a good amount of goals. Hamsik 9 goals (1.6 shots), Nocerino 10 goals (1.4 shots thx Zlatan) and Ramirez 8 goals (1.8 shots) which goes well with the sheer pace of his runs, his technique and if it also indicates an ability to make quality runs into the area, then the goalscoring should continue.

Ramirez started the season brilliantly but along with the team is starting to slow down a little bit.

He plays the number 10 role and it will be interesting (with all their strikers) if or when there will be room for him on his national team as a starter. Not that Uruguay, with all their success, should be strongly encouraged to change anything, but Ramirez (21 years old) definitely has the talent to become an impact player for them.

The passing-game of his playmaking is possibly still plagued by lack of experience, they don't make it easy in Serie A either to be creative, but what he does have on top of actual playmaking talent (including a nice through-ball) is that one-on-one ability, which can be such a valuable difference maker in this team sport.

In fact his 2.6 successful dribbles per game (and remember this is likely central in tight space a lot of the time) is very good in Serie A and I believe in the whole league currently only bettered by Lavezzi, Jovetic and Biabiany.

His workrate isn't lacking either, which is good for someone in his position, but at least for now, more than making a real solid defensive contribution, the results are sometimes too many freekicks.

Bologna managed to quickly tie him to a long-term contract and they'll be very disappointed if that eventually won't earn them a lot of money.
Indsendt af Stefan kl. 07.19