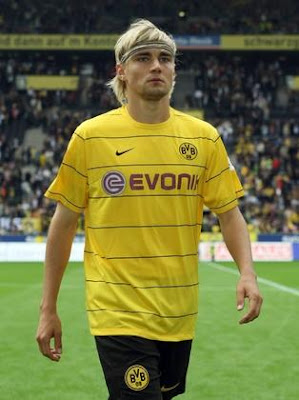 Easily one of the best fullbacks in the league during Dortmund's fantastic title-winning season. Impressive coming forward and like so many others on the team, teamwork at a very high levl

Schmelzer drops a little bit for no reason in particular, other than perhaps make room for his, currently I believe, slighlty stronger team mate, on the other side, Piszczek (but I would be interested in what the popular view is among Dortmund fans).

Schmelzer is just a very polished attacking full-back to such a degree that I actually think he might be a safer bet to the better one long term.

He does attacking-full back things very well with great consistency, with no let downs ever in technique and certainly not stamina where his lungs carry him forward seemingly forever.
Indsendt af Stefan kl. 05.03