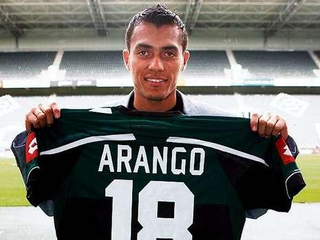 While players such as young Herman and defensive beast Dante (in Bundesliga tradition snapped up by Bayern) still seem like they're more fashionable, it's Arango's impact (aside from Reus who of course is totally obvious, just look at his rank) I'm a little bit more confident in vs players looking very good in Lucien Favre's well oiled Gladbach machine.

In fact to add to the mid-season thoughts below, Arango was top 5 in the league in key passes (dead-balls help there of course but still impact), top 10 in shots on goal, quite uniquely top 15 in passes per game where no winger is even close to his 54,6 and most importantly, league wide, he is only behind team-talisman Marco Reus in successful through-balls made.

Finally, the contract extension I was speculating on mid-season turns out it was only 2 years which sounds better, just like Gladbach's transfer moves this off-season arguably adding one of the most promising players in Europe in each line of defense, midfield and attack. They're the former Spain U21 star Alvaro Dominguez - very much seen as the Atletico Madrid captain for years to come, but they needed the money apparently, Grantit Xhaka the great all-round talented Basel midfielder and in attack Luuk de Jong 21 has been getting better and better recently. Xhaka and de Jong of course on the list already and of course Gladbach can complete the quadruple of elite talent with Ter Stegen in goal. Not bad at all.

Something of wild cad here, who I'm not really confident actually belongs, just like I'm not really sure if it's a good idea, if Gladbach indeed did extend his contract at age 31 with 3 or was it 4 more, years. Then again, it's a club that's currently riding where nothing goes wrong.

Without Gladbach's great success this season I wouldn't have included Arango and besides their obvious star Marco Reus who is due to appear much later on the list, the real star if anything is the team itself and coach Lucien Favre who has done a great job with it.

But I did want to to include another player of their's and other than Reus, I think it's Arango's magnificent left-foot and what that has been creating in both open play and set pieces, that's made the most impact, while others who I've noticed like for an example another notable the young Patrick Hermann, have with much fewer touches moreso done a great job of taken advantage of how incredibly well the team functions + all the consistent individual Reus brilliance, than individually (at least for the time being) made enough impact to be considered elite if you will.

When I then found out, something I had completely forgotten, that it was actually Arango who also captained Venezuela on the way to their Copa America semi-final run, my mind was made up about including him on the list.
Indsendt af Stefan kl. 05.26