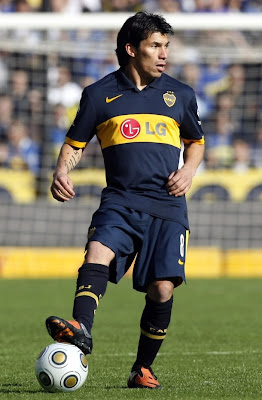 While Sevilla continued to disappoint Medel established himself as a fan favorite. I think he's become that on all his teams now, with his bulldog style of play winning the hearts of the fans.

He also continued to see a lot of the ball (one of only 7 non Barcelona/Real Madrid players in the 20 most passes per game in Spain), and while I still don't see quite enough constructiveness in his touches and passes to compare to the very best, there is also a chance a lot of it is still very tactical surrounded by all-round midfielders (Rakitic, Trochowski) and plenty of attacking wingers (Navas, del Moral, Reyes, Perotti) Medel is very much guarding the fort, both with and without the ball, not unlikely somewhat limiting showing what he can really do.

He has definitely shown that he has range of passing by now, and he is one of those players where I wouldn't be surprised if he'll be much better ranked eventually.

Medel came to Europe with a big reputation from South America where I think he was something of an idol for Boca Juniors and also when playing in Chile.

He has been very good for his national team, though when I was watching I paid more attention to more ambitious passers of the ball like Carmona, and of course Vidal whenever he was playing a more central role.

Sevilla hasn't seen the best of times while Medel has been there. I do seem to remember some good form in the end of last season (I remember giving Ivan Ratikic a lot of credit there), which Medel was part of, but this season again, with a strong looking squad, they've been underachieving enormously.

Medel isn't called "Pitbull" for nothing, he is very aggressive in his defensive play and has Mascherano-like spoiler qualities when it comes disrupting opponent play.

He is more uneven with the ball though. Especially his distribution which hasn't been good or constructive enough with his many touches. At 50.3 per game he is leading the team. I'll be surprised if there is anything wrong with his technique though, he does show he can spread the play at times, and it could just be tactically where he is struggling within the team setup. Where to put the ball? Even defensively where his effort is immense otherwise, that can undo a lot.

Speculating a bit, but either yet to find his ideal role and/or struggling with a role not defined to his strengths, for an example if he is too much of a restricted holding midfielder limiting his aggressiveness (or in the worst case scenario making it a liability) and therefore not getting the best out of him, not least defensively, but possibly even when Sevilla tries to attack where he is then too much of a non-factor.
Indsendt af Stefan kl. 07.24