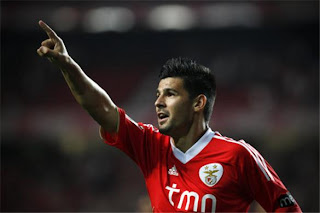 Nolito is another wild card making his way on to the list, but who in a limited sample size I'm enough of fan to include with real hopes of a higher ranking next time, instead of making me look silly and being a no hoper.

I'm interested in his background. He has no Spain youth caps, but at a relative late age suddenly started bagging the goals for Barcelona-B, enough to even earn a few sub appearances for the mighty first team, then joined Benfica in search for more playing time and a more realistic level for him, and in my opinion has been a guy who since then looks like he is consistently a danger to score. That's not a bad thing at all.

He is not an automatic starter on a team with a lot of attacking talent, but actually has more 2011/12 minutes in the league than the likes of Rodrigo, Bruno Cesar, Aimar and Gaitan as well (though of course resting plays in for some of those players). Then in his Champions League appearances I also thought he was good and showed he belonged.

My impression is that he is a bit Soldado-like in his attacking play/looking to score but also has enough all round skill to function as a winger, being a serious threat from there and provide decent attacking midfield play as well.
Indsendt af Stefan kl. 05.36