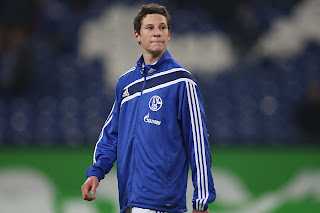 
Another German "wunderkind" who has been on everyone's radar for quite a while already, even though he is just 18.

I've been thinking that he has been on the verge to explode all over the league, with all his talent, a number of times already, but while that hasn't quite materialized itself yet, and I think one reason is Schalke's huge squad with a lot players with certain perspective, enough anyway that you can't just bench everyone permanently, but I do think it is a team that is clearly better when Draxler is on the pitch. That alone is no small feat.

Operating from the left-wing he has strong one on one qualities. To such an extent that he has overtaken even Jefferson Farfan (who is in a strange season to be fair) as Schalke's main dribbling protagonist.

Then there is his tall lanky frame which might the best thing about him of all. There is just no way he should not grow really really strong (which along with all the skill should make him a real force) and a minion like Lewis Holtby (his somewhat harmless teammate) must be feeling jealous.
Indsendt af Stefan kl. 04.52