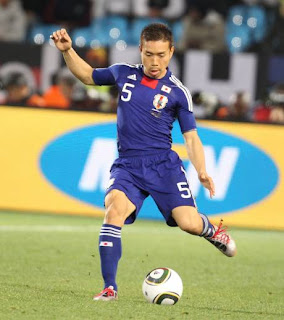 It's hard to get impressed by anyone at current Inter but I think Nagatomo's play deserves a lot of respect.

Performed well enough in the Asian Cup and lowly Cesena in order to make the move to a big club and I think he has been very solid in just about everything he has been doing.

Actually I think he would prefer to be more attacking. He is held back a little when Maicon goes on his raids on the other side and often instead of showing his own speed and skill, he is reduced to make more safe contributions.

Now, no one at the moment will look really good defensively for Inter, at the time of writing the team defense doesn't work, but one-on-one I like him, and that's more than I can say for a lot of fullbacks, he has speed and good control both when dribbling and passing. Excellent teamwork, very good decision making, and seemingly unlimited work rate.

Unless I find something that I don't like, I think he'll be climbing the list in the future.
Indsendt af Stefan kl. 07.03