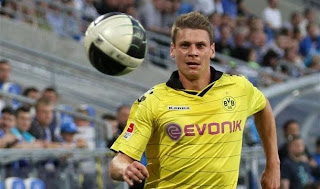 Well, Piszczek has been the best attacking fullback in the Bundesliga for at least two seasons now. So much so that Klopp's "interesting" comparisons to Dani Alves have become more and more valid.

To be honest I'm still not totally sure of his overall technique (isn't it uneven sometimes?) but his pace, work-rate, power, tactical soundness, off the ball relentlessness have made him one of the greatest forces in the Bundesliga during Dortmund's great run. Yeah, there is a chance this is too high, I do have some reservations still and it's become clear that good players have every chance to look great in Klopp's superbly oiled Dortmund machine, but overall it's time to reward the Piszczek-impact and catapult him up the list.

Well, he is ahead of Nagatomo, and Schmelzer for that matter, because I think he has made more of an impact this season.

I'm not sure he is as polished as some other fullbacks and will maybe struggle to keep some of them behind, but as of right now with his pressure game, aggressiveness, and maybe in general, being somewhat better defensively, at least than Schmelzer, and like seemingly every Dortmund player his teamwork within the setup could hardly be better.

Piszczek is tall for his position, strong and has been an impactful force coming forward consistently for some time now.

I'm still unclear about how good his technique really is (passing and control related) and that should determine his future ranking.
Indsendt af Stefan kl. 07.12