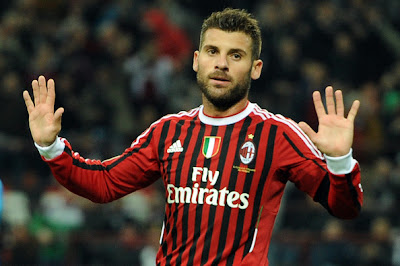 With Ibrahimovic now gone it will be interesting if Nocerino can live up to last season's attacking contribution. The running and capable technique is still very much there for this two-way player, but Milan's offensive will inevitable become different without the big Swede.

Undoubtedly enjoying his big break through at top level, yet still drops some 35 places on the list. Go figure!

The answer of course is that a lot of very talented young players just can't be held back, while Nocerino (though his skill has always been underrated and underused) is more of the water-carrier type of player fully content to take a backseat.

This season however has featured something of a goalscoring explosion coming from him. One though, that I really hope I predicted in a post somewhere before the season, when he was grabbed by Milan from Palermo for about 3.50 (yes really) in what was a fantastic bargain by Galliani, because it really does make sense and shouldn't even be a surprise that a midfielder with Nocerino's unlimited running capacity, whether it's defensive work or crashing forward with capable technique, would be a great beneficiary for Ibrahimovic holding up the ball, make a great play, style of playmaking. You have to say it has all worked out very well for Milan.
Indsendt af Stefan kl. 11.56