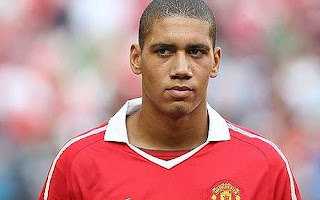 Chris Smalling still has a lot of upside and in many ways you can argue that he is still very much developing as a player, but I don't think that should ever be confused with him not being a very good one already.

He is very strong, dominant in the air and a good defender one on one. He also has good pace for a centreback.

Smalling is still not very experienced though (remember how quickly he came from almost nowhere) and will make bad decisions sometimes related to that, whether it's his positioning or with the ball where he is still too limited.

He is still by some distance most comfortable when defending in and around the box, Manchester United still does that so well, but I would say he has the potential to be effective in a higher line as well.

At right-back, where he has had some really good performances, he can make powerful runs into space and generally his athleticism is a tough matchup for more traditional fullbacks.
Indsendt af Stefan kl. 03.17