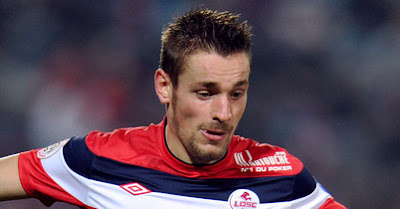 Just to conclude on some of the mid-season thoughts below, Debuchy's foul rate rose to 2.5 per game which is top 5 in the league. This player seems like a driven aggressor in just about everything he does on the field.

His 4.3 defensive clearances per game makes him one of only three categorized fullbacks in the Ligue 1 top 50 when it comes to that.

It's also worth nothing that the statistics indicate Debuchy handling himself well in the air. He was actually top 5 in average aerial duels won per game among all players in the Champions League group stages, winning 18 out of 22 duels and in Ligue 1 (with a much bigger sample size) he is the only side-back in the top 20 and with his average of 2.1 headers won per game (66 out of 84) also Lille's premier aerial-duel winner.

Debuchy is looking likely to move away from Lille with Newcastle being talked about a lot. He would be a serious upgrade over what they currently have there, and with his former teammate Cabaye already being a key-player at Newcastle, it would seem like a really good move.

Debuchy should really have been on the list already. At least the last time around after an(other) excellent season for Lille winning the French championship.

His attacking play continues to be impressive and he is relentless aggressive coming forward where he is both quick and for a fullback all-round skilled.  I have a feeling his background playing other positions, allegedly (and will say that I've never seen it) even as a deep-lying playmaker at one point.

When it comes to the defending, his buzzing energy and great intentions alone almost, puts him ahead of the many good attacking (but bad defending) fullbacks not making the list.

I don't think he is necessarily a very good one on one defender, he commits a lot of fouls (leading Lille by some distance at 2.3 per game), but at least his aggression is intelligent and tactically he knows what he is doing both defending (where he manages to help out A LOT which his impressive looking stats comparing to teammates are also strongly indicating) and going forward without making mistakes.
Indsendt af Stefan kl. 05.39