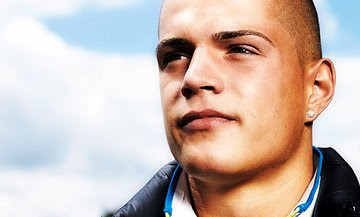 Xhaka moves to Gladbach. There isn't really that much to add from the mid-season thoughts below other than I'm extremely interested and curious in how well it will translate to the Bundesliga and Favre's Gladbach team.

I have seen some headlines calling Xhaka a Reus-replacement but I suspect they don't really know what type of player he is. Two very different players.

The remarkable thing of course is that Xhaka is so overall talented that his position or role in a way is still up for grabs. You can potentially see him in quite a few different roles, from the deep-lying constructive midfielder (which is what he's been doing lately), to a more attacking one making plays, or how about a box to box midfielder even a winger cutting inside isn't out of the question. What will Lucien Favre think is best and how will it work? Interesting times ahead at Gladbach.

Excellent all-round talent of a midfielder who was part of the Swiss U-21 team that made the final of the European Championship losing to Spain and who for Basel (and now the Swiss senior team) is enjoying a big break-through season with several big clubs rumored to be interested in his signature.

One game you can see this 19 year old channel a defensive midfielder holding it together against giants like Bayern or Manchester United (not least because he is the only one under pressure who is skilled enough to move the ball forward) in another (like recently for the national team) he can be wearing the number 10 and creating.

It's compatriot Shaqiri stealing most of the headlines with his tremendous difference making in the final third, and understandably so, he will have a very good ranking and has already signed for Bayern München, but don't forget Xhaka who already is a very complete midfielder. At 19 he'll make the occasional youthful mistake with his decisions but he is a very constructive passer who even show hints of real playmaking, whether it's building from deep or even going past people further forward on the pitch.
Indsendt af Stefan kl. 09.57