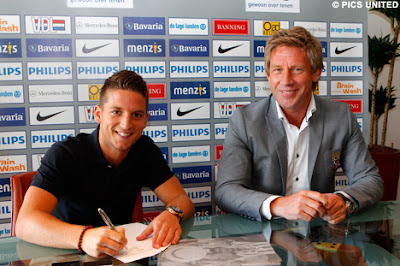 Well PSV once again failed to win the championship and it was another one for Ajax.

Mertens continued to play well and his stats still look extraordinary finishing with 21 goals and 16 assists. I'm a little bit unsure how he compares to other current star wingers in Dutch football, Ola John, Narsingh or Assaidi who's brilliant flashy technical flamboyance made me debut him on the list this time around. I think they'll move closer to each other on future lists.

Tiny super quick agile winger who has been one of the best attacking players in Holland, basically ever since joining Utrecht but having now joined PSV (13 million Euros) is currently hitting new heights with a great season so far.

Excellent dribbler with all his skill and small player attributes. He is someone who can almost fly with the ball at his feet, seemingly excel in both small and more open spaces, and with his great right foot he can finish himself or create for others in passing combinations where again his quickness can be a real difference-maker taking advantage of available space or simply creating it on his own too quick to be stopped.

With PSV top of the table Mertens has a very impressive 16 goals and 12 assists in 23 games this season.

Could have a good case for a better ranking.
Indsendt af Stefan kl. 12.11