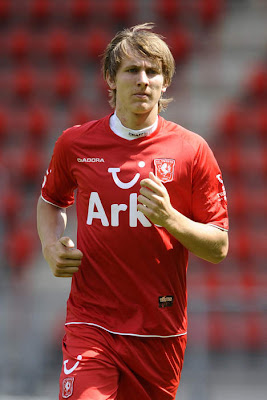 Luuk de Jong continued his impressive performances on his way to 26 goals and 9 assist in the Eredivisie.

Topscorer Bas Dost was also considered but considering I've seen him much less than de Jong (who I haven't even seen in all that many full matches) and early impression is of  a much(?) more limited player compared to Luuk when it comes to technique, movement and intelligence I didn't include him.

Both have now made moves to the Bundesliga. Dost to Wolfsburg and Luuk de Jong to Gladbach who I've already applauded in related profiles for their investments in some of the finest young talent in Europe. Anyway it will be interesting who of the two will best live up to countryman and established top torjäger Klass-Jan Hunterlaar

Luuk de Jong's ranking is possibly hurt by the fact that I don't see him a lot, and that some previous early impressions of someone, maybe a little bit too raw to be considered a star, are still roaming around (somewhat fresh) in my mind.

He's been a highly thought of striker-talent for some time now and at the moment could very well be seriously coming into his own. He is strong, tall and can hold the ball up well. He has good movement in (and around) the box anticipating passes and deliveries both with head and feet (he even looks like he can do damage with both showing fine touches). He also looks like he is skilled and intelligent enough to create for others.
Indsendt af Stefan kl. 09.50