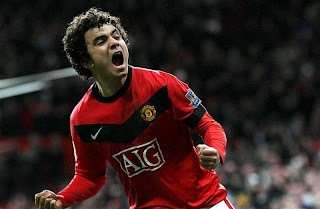 At the time of writing, Rafael has actually only played 5 games in the league this season and of course his team Manchester United bombed out of the Champions League. I would say his form is good right now though and all his blistering talent, pace, perhaps surprising strength, his overall technique and just all that sheer aggression both when defending (good one on one but still with some reckless positioning) and storming forward applying attacking pressure, all of it still looks like a sure ticket (and really the same is the case for his twin who just has Patrice Evra ahead of him) to a much better ranking.

Health (proving himself over longer stretches) and mental mistakes (so worked up that clear thinking goes awry) are the only things seriously holding him back.
Indsendt af Stefan kl. 02.59