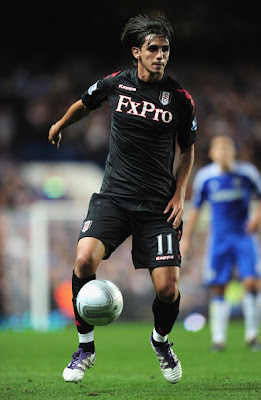 Ruiz only registered 0.9 shots per game for Fulham. That's not even in their top 11!

Clearly this has not been working optimally neither for him or the team. A prolific flamboyant goalscorer and creator in Holland he barely gets to shoot on goal ever playing for Fulham, or be involveld in the centre of the pitch, and to the benefit of no one is pretty much relegated to attempting crosses from the wing with questionable successes. He just hasn't fitted in very well and it must get better.

People who saw him for Twente at one point arguably being the second best player in the league after Luis Suarez will know about his qualities, but even at Fulham in a poor first season there are subtle signs or arguments to be found that Ruiz should play an increased attacking role to the benefit of the team.
Bless Clint Dempsey and his goals but with 0.7 successful dribbles per game his turnover and dispossessed ratio stands at 2.3 and 2.4.  Ruiz has 1.1 successful dribbles per game but just 1.6 dispossessions and 1.2 turnovers. Give the man some more touches and in other places.  Ruiz has a lot more to offer than we've seen so far but need a different or bigger role in the attacking game to really showcase it.

The very best of times Ruiz was almost dominating in Holland, but he has struggled to find his skillful feet in England so far and at times not really blending well in with the players around him and overall has been quite up and down. Only barely so far, I think it's safe to say, avoiding being tagged (prematurely) as a flop.

It's very possible things are looking up though, Dembele who has more tools as a player than the majority out there, and who I'm guessing will make a comeback on the list the next time, has recently been playing in central midfield with Danny Murphy, hopefully meaning that very limited, when it comes to everything that has to do with technique, Steve Sidwell must be out, and up front new big man (and also formerly ranked) Pogrebnyak has always liked to use his feet. Overall I think such player constellations will have a better chance of creating chemistry with Ruiz.

Ruiz of course is very much a flair player and can put that into great passing of different ranges, from one touch passing combinations to sweet deliveries into the box, sublime touches including dribbling and if put into position to do so (which has rarely been the case so far in England where he is criminally averaging just 1 shot per game YIKES!) also be a dangerous goal-scorer.
Indsendt af Stefan kl. 01.26