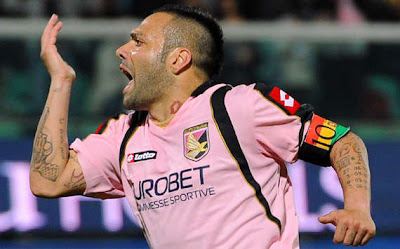 I've always avoided putting Miccoli on these lists and had no intentions of including him this time either, almost no matter how many goals he scored or created for his team, it's just too hard imagining him fitting in all that many places (at a high level and not least tight tunnels in mountains ) other than exactly where he is at (being somewhat fat :) ), but at some point when ordering players it just hit me how many Serie A players, there were just no way you could justify ranking ahead of Miccoli and his significant impact this (and most of the previous) seasons.

Miccoli is certainly not getting any taller or even slimmer as the years go by but he is still dynamic enough over the small amount of space he needs to make room for his great arsenal of different finishes using his wonderful right-foot, whether it's longer range or close range.

On top of that (11 goals and counting) he is also having a really good season creating for others (almost Di Natale-like as the attacking center piece of his team) and so far has 12 assists to his name.
Indsendt af Stefan kl. 10.40