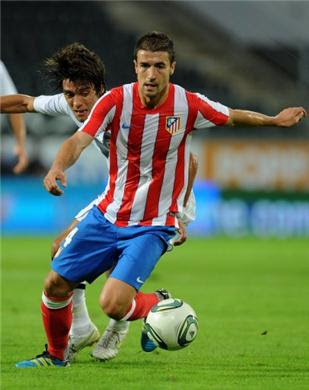 Gabi continued to be a very consistent central midfielder for Atletico, doing many of the things talked about in the mid-season 11/12 section below, on his way to winning the Europa League and getting closer, than what seemed likely earlier in the season, to Champions League qualification as well.

One thing that should definitely be noted is that few players foul more than Gabi in Spain.
In fact in the whole league he has been in the top 3 in fouls committed per game for the last two seasons, and that for two different teams mind you, before you blame it all on Diego Simone telling his players to get nasty...

What I'm guessing is that it's a combination of still being somewhat more of an all-rounder than very physical strong, very comfortable in duels (he tactically positions himself in a ton) and maybe not least his defensive smarts and discipline making him very willing to be the spoiler and commit the minor professional fouls, preferably in the opponent half, time and time again if that is what's required.

Other noteworthy stats, besides all the defensive duel activity, Gabi is top 20 (17th) in the league in passes per game and accurate long-balls as well where he is 14th showing his range especially when spreading the play.

He is number 10 in key-passes (which is a pass leading to a shot or header on goal) where his set-piece expertise of course plays heavily in. What is perhaps more impressive is that he is number 7 in accurate crosses per game, that's mostly reserved for wider players and shows that he is a good match with Falcao terrorizing the box. Mind you, set-pieces don't count compiling this particular stat, so Gabi's very good kicking-technique is also a weapon in open play.

Instantly a leader for his new team Atletico Madrid this season, where he was originally a youth product, but played just 58 games for the first team between 2004 and 2007.

In the last 4 years for Zaragazo though, he has only been getting better and better maturing into a natural leader in midfield, and after the 2010/11 season, his best ever (resulting in his debut on my list) he had become too good to ignore for Atletico who brought him back where it all began.

Gabi is what you can call a solid, very consistent, football-intelligent central midfielder who is disciplined defensively and a good distributor of the ball. Including some good range of passing, without being what you would call a playmaker.

He is also very good on set pieces and will definitely create chances through that.

He is less of stand out on a very talented team compared to being the main man at Zaragoza, but his consistently good contributions from midfield, both offensively and defensively, shouldn't be ignored and he is just one of those central midfielders (even if a level below the best) who is able to become the glue holding everything together. Very valuable.
Indsendt af Stefan kl. 02.41