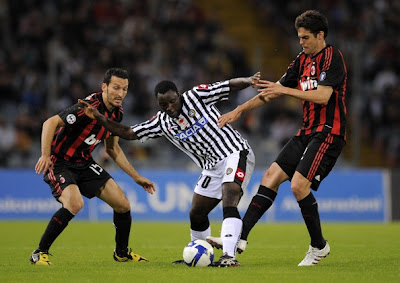 Asamoah continued to impress and now moves to Juventus where his versatility should make him a quality alternative to any of the participants in last season's instrumental M-V-P (Marchisio-Vidal-Pirlo) midfield.

Following up on below, he actually upped his dribbling to 2.00 per game. The only central midfielder in the top 20 and he is giving the ball away less than anyone else above him.

Asamoah was also the 9th most fouled player in Serie A last season.

Asamoah is athletic enough to play just about any midfield role. Attacking, defending or both.

Previously he was largely known for his great work-rate, running capacity (and that remains intact) but I think his skills have improved too, and for someone who much of his time in Italy has had more defensive roles, he has been impressing one on one (averaging 1.7 dribbles per game leading his team) recently coming forward (defensively he is hard to beat as well) with the ball.

Asamoah will probably never have a great varied (or totally secure for that matter) passing game but I do think he has moved away from being somewhat of a liability moving the ball around when seeing many touches (like he does for Udinese) and now know exactly where to put it, so to speak, not least in Udinese's all important transition phase, and manages to do so with a pretty good success rate.

Actually when looking at his stats, I'm surprised he doesn't have a few more longer passes to his name (a modest 2.3 per game) but I do think he moves the ball well out wide this season.
Indsendt af Stefan kl. 10.30