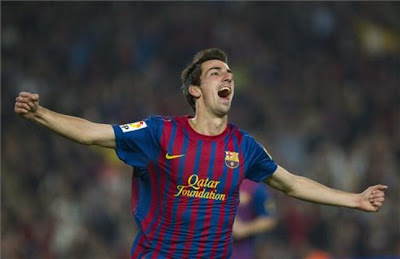 Since it's still very early days there is some guessing involved here and Cuenca is still pretty new to me, but if any team deserves the benefit of  doubt these days when it comes to the quality of their young players brought up to the first team, it is of course Barcelona.

My impression so far is one of another very skillful player. One possibly even with some real trickery to his game posing plenty of difficulty for opposing players, basically meaning, Cuenca's ball control is looking very good then and I wouldn't be surprised if it's more that control, than any effective athleticism at this point (maybe a weakness there), making him both fast and agile with the ball at his feet.

Tactical play, football intelligence? Haven't seen anything bad at all which just helps remove further reservations and almost assume that's something also very competent. Again, from Barcelona at the moment, you almost can't expect different can you?

On top of that, I also think I'm seeing some creativity. That could just be his bag of tricks flattering things a little bit, not sure really, but I do think he is at least consistently constructive in his passing and movement, which is always a very good thing and simply a must for Barca.

All in all the most likely is that Cuenca quite simply already, possesses some very well developed Barca-DNA.
Indsendt af Stefan kl. 05.01