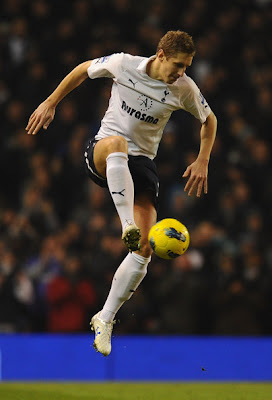 I realize having him ahead of Kaboul, who is having a better season, is a bit strange and a tough argument, especially since Dawson's injury issues have resurfaced this season, but I like him a lot as a player, he has great range of passing and can move the ball pretty good out of defense (meaning less defending!) where he is also a natural leader. His team just happen to have one already in Ledley King.

I like that he is kind of both the sweeper style defender (while tall) clearing trouble and reading the game higher up, making interceptions, at his best able to overcome lack of mobility, I guess that I really like what seems be to great defensive instincts, but that he is also fully at home playing the more traditional English centreback, making strong tackles, winning headers, protecting the box right where it's at.

I see Kaboul more as a very strong athletic version of that type of centreback, including the kind of pace that puts him ahead of just about anyone of those, but if his technique is also even better than I've already given him credit for, not least his passing repertoire, then Dawson with worse health and less athletic ability, has little argument left and I'm guessing Kaboul will have caught up to him on the next version (remember at 192 last time around Dawson had a good head start).
Indsendt af Stefan kl. 02.37