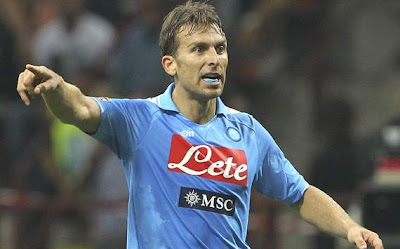 Expert defender in a three-man defense, yes, but say Barcelona, a top team who will often use such formations, likely would never seriously be interested. Campagnaro with his right-back background will move into open space well enough and has mobility, but his technique is definitely lacking and his passing is limited. In other words he is more of an old-school three-man defender than someone making use of excellent midfield-ability (think Busquets, Mascherano, De Rossi or Bilbao's Martinez)  adding quality to a modern three-man defense.

I don't know how meaningful it would be to get called the best defender in a 3-man defense? There are of course plenty of the world's best you never (or very rarely) even see in such a formation, but Campagnaro might just be that guy playing in Napoli's back-three.
He is both a good right-back as well as a centreback if needed, and he kind of combines it to be a true expert defender in a 3-man defence.
Indsendt af Stefan kl. 06.25