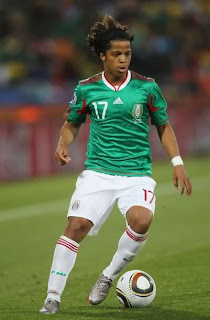 For Mexico he has consistently shown what a good attacking player he can be (lots of skill+pace), and those performances are largely why he is still ranked.

Last time a pretty good loan-spell to Santander was enough to defend his ranking, but for Tottenham, who still own him, absolutely nothing is happening and it's a disastrous waste of time and talent for everyone involved.
Indsendt af Stefan kl. 11.17