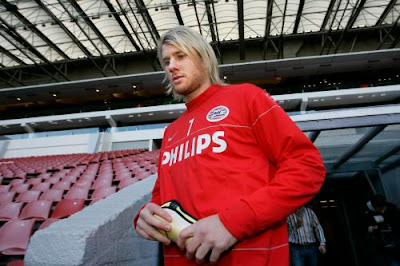 No doubt Rasmus Elm or the much hyped right now John Guidetti (his full name btw is John Alberto Fernando Andres
Luigi Olof Guidetti) would be the more sexy choices among the Eredivisie Swedes, but that's still way too premature for me, having not even seen Guidetti over 90 minutes and Elm apparently being very good now, if true, being something that has well and truly been sneaking up on me. It might be exactly what Sweden has been lacking though, for a long time now, mostly developing good strikers, solid defensive midfielders and a few centrebacks here and there but a midfielder with at least some potential for attacking difference-making has been very rare in recent years.

Anyway, with Toivonen I guess I'm rewarding the solid. He seems to do everything pretty well. Good teamwork with the ball linking with others and without it decent movement for his size. Versatility and physicality with both striker, target man and more attacking midfielder play in his arsenal. Very solid player.
Indsendt af Stefan kl. 12.01