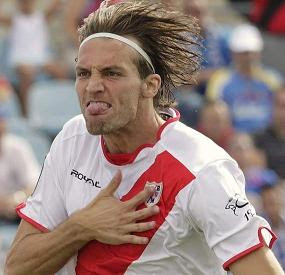 By all accounts a hugely improved player this season carrying Rayo Vallecano to some impressive performances and being absolutely instrumental to their attacking play.

What has really caught my eye is his rather unique play, at least in some games, combining to some extent target-man play (he is top 3 in Spain with 4.4 aerial duels won per game), linking very well with others, head or feet through skillful one touch play, with more along the lines of attacking midfield play being a presence in more places on the pitch and even doing some intense defensive work. There is certainly not anything wrong with Michu's workrate, and when you then can somehow add to all of that, some impressive looking poaching in the box featuring good positioning, quality runs and sheer reaction/anticipation resulting in impressive goalscoring, then all in all, I'm not really sure I've ever quite seen all of those things done before by a good player simultaneously in games, quite that way, in the style, that Michu manages.

Maybe those words are too big. Way too big even. Maybe he is just in a short spell of unreal form. After all it was not long ago that he more looked like a player destined for an average professional career. Maybe even below La Liga, but this season at least, and I guess I'm celebrating that here in a non-holding-back manner, Michu is a pretty unique player.

Thinking about it, I can't quite find anyone to compare him with. A Spanish version of (one who is based more on technique than physique) Tim Cahill (in his prime)? I'm really not sure.

If I was to speculate it's possible Michu's improvements could just be much better fitness and becoming a lot stronger, allowing him to play up to his natural talent and do many more things than he ever could before. It could also be something tactical, being in the perfect role at the perfect time and no matter what Rayo manager José Ramón Sandoval definitely deserves a lot of credit for Michu's fantastic breakthrough this season.

To conclude, I do think I'll know more once the next list comes around. For now he was just too damn interesting not to include.
Indsendt af Stefan kl. 02.23