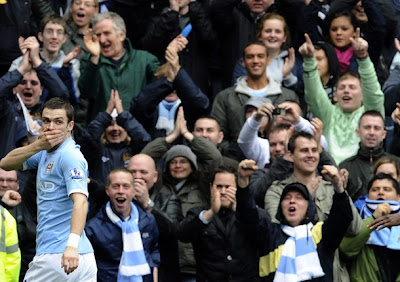 He has great attitude, control and technique when it comes to everything involving touching a football. As well of course as the needed pace. Especially with the ball at his feet where his combination of control and acceleration makes him a standout.

His team Manchester City has of course added tons of talent (including quite a few list-people) so he will definitely have to battle for playing time. He must have passed the aforementioned Wright Phillips for starters though and the fans will love every minute they see Adam Johnson on the pitch.

Well, Mancini will disagree, and of course know better, when it comes to Johnson's attitude which he has even criticized publicly.

What I meant was that he brings lots of energy. Actual willingness to work. What Mancini talks about, other than what goes on outside the pitch, which I agree he should stamp on since it would be terrible if talent such as Johnson's isn't fulfilled, must be tactically where Johnson will make mistakes with lack of teamwork in general and mistakes defensively.

He would step right into, and be a prime attacking weapon on a lot of teams already I think, but on a team as strong as City, it looks like he will have to improve the weak points to fully establish himself.
Indsendt af Stefan kl. 04.06