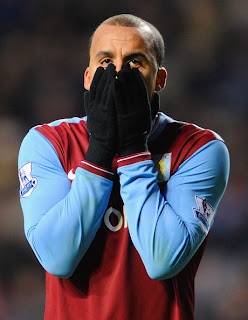 For me currently the second best English striker after Wayne Rooney and I think it's only a matter of time before that also becomes the popular view.

The way Aston Villa plays he doesn't get nearly the number of goal scoring chances that some other strikers enjoy the luxury of and therefore there hasn't been that breakout goalscoring season just yet. But his outstanding pace, work-rate plus underrated power and technical ability (control and shooting) in my opinion puts him ahead of the pack.

If he is a good enough tactical fit compared to the various rivals in order to earn a World Cup place is an interesting question though.

Some forwards automatically will get selected ahead of him because of what their size brings to the table and then there are some who are still a little bit better in and around the box in tight space including with their back to the goal and are perhaps more proven finishers (even if I think that's somewhat dubious), where Agbonlahor is at his very best running into space.

How much of that Capello thinks England will need from a reserve, with the main guy being better at that and everything else, will make or break Agbonlahor's World Cup hopes.

Well that popular view will have wait some, won't it?

He seems to have stagnated and just like everyone is currently having a tough time finding the net for Aston Villa.

As far as England strikers and this list go, he has been passed by not least several big men: Bent, Zamora, Crouch and newest arrival Andy Carroll.
Indsendt af Stefan kl. 02.48