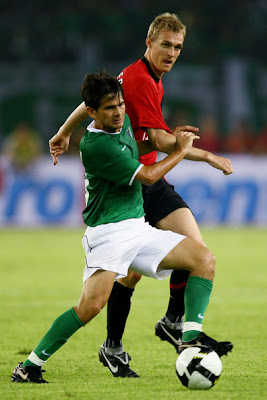 Well, he has kind of turned into both the last couple of years making him a valuable player for Manchester United.

Few are so effective constantly harassing opposition players legally and illegally (at least anywhere that's not the English Premier League!). He'll huff and he'll puff, kick you to the ground. Whatever it takes. He is a monster, said Sir Alex Ferguson!

Of course had he not seemingly improved in others areas the last couple of years he wouldn't be anywhere near this list. Or become a United starter for that matter. It's possible he was always hard working defensively, did his best for the team and so on, but at some point he just became big, mean and strong making those crucial parts of his game all the more effective. Even making him one of the best at what he does.

How much things like his technique has really improved the last couple of years I'm not sure but what is always clear is that not routinely looking bad in those areas (with the ball) is helped a great deal by having strong balance and Fletcher these days certainly has that.

That balance and underrated technique has even made him the more effective Manchester United central midfielder going forward in the final third which on this list is always a nice feather in the hat, and I suspect a key element in making his midfield presence even greater making him a valuable figure for his team Manchester United time and time again, sooner or later, winning the midfield battle.

I still see Fletcher as primarily a very good physical player who uses that to make him effective both when defending and attacking.

I will say though, that slowly but surely I'm warming to his technical ability as well. There is some good control and there is some good one touch passing as well coupled with sound decisionmaking.

He is also a very consistent player which he is proving once more, game in and game out, this season.
Indsendt af Stefan kl. 05.03