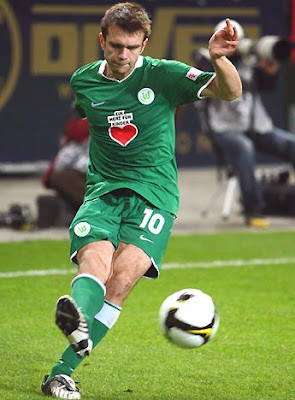 Old school number 10 who's playmaking in the Bundesliga has just been too astounding to ignore.

Athletically speaking he is behind the large majority of players on this list but he makes up for it by being extremely gifted in everything that involves touching the football.

He was (and still is) the brains and conductor of the great Wolfsburg attack that took the Bundesliga by storm and won the league 2008/2009. That season he amassed an amazing 23 assists.

If the simple plan was to score plenty of goals by mixing a passing (and set piece) maestro like Misimovic with a couple of very good strikers then it certainly proved successful as Grafite and Dzeko finished one and two on the scoring charts with 28 and 26 apiece.

Helping their rankings Dzeko and Misimovic continued to shine last season where Wolfsburg both scoring less goals and letting in more stumbled to an 8th place finish.
Those two actually managed to more or less contribute at a similar impressive rate as in the glory year while Grafite on the other hand struggled to find consistency and in that kind of attack only netted what's a modest 11.

Don't blame it all on Grafite though because the real reason should probably be found with coach Felix Magath leaving the club.

Magath who, with a serious risk of entering into blasphemy, kind of like Alex Ferguson in England, just seems to somehow know exactly what it will take and how to execute it in order to do well in the Bundesliga.
Once again exemplified last season where it was Schalke's turn to feel his heavy handed magic touch impressively finishing second in the league behind much more talented Bayern. 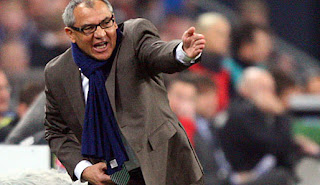 Wolfsburg on the other hand without Magath just couldn't find the right balance and if you consider they're playing with two centre-forwards and then an old school "non factor defensively" (lazy) number 10 around them, it's really more remarkable that they ever did. Even in a league, especially that year it seemed, erupting into almost reckless emphasis on back and forth attacking football.

But he isn't called "Quälix Magath" for nothing of course (a mash of his first name Felix and the German verb “quälen”( to torture!) and through stern discipline and demands of hard work he made it all come together.

Looking to get back on track then, before the upcoming season, wealthy Wolfsburg has been one of the most frequent teams in the transfer headlines. Not least with constant rumors surrounding star striker Dzeko going or staying but also reinforcements coming in, not least in the form of a new good looking central defense with the signings of Simon Kjaer and Arne Friedrich.
They should improve things in the back definitely, but defensively just how much, if Wolfsburg under new coach Steve McClaren still plays that same attacking trio up front, is a good question and perhaps also an interesting little test on the (oh so much rambled about on this list) importance of central defenders.

Of course if Dzeko gets sold the whole picture changes completely but even if that doesn't happen (and for now it probably won't) some other interesting signings they've made could change the balance as well if those newcomers can steal playing time from Grafite.

I'm thinking of forward/winger Mario Mandzukic who I suspect is much more of a hard worker than Grafite and then interestingly, if he can break through already, young Swiss recent U-17 World Champion Nassim Ben Khalifa who at 18 years of age now isn't just already on the Swiss U-21 team but in contention for the senior team as well. No matter what happens he is definitely one from that team to at least keep an eye on.

Misimovic has moved off the radar to Turkish giants Galatasaray.

Most likely that will inevitably result in his ranking continuing to go drop and not helping are reports of the team really struggling and Misimovic one of the players taking the most heat.

Maybe he is the expensive highly paid foreign scapegoat. That seemed to be the case with Elano and speaking of him, who has been shipped back to Brazil, one less attacking star could do the team a lot of good.

Arda Turan, Elano, talented Dos Santos on board on loan, Misimovic (not least) + a striker in the same lineup could easily be a team with some major balance issues.
Indsendt af Stefan kl. 11.08