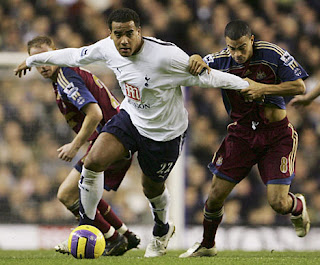 A huge drop for the big guy. Watch out below everyone!

He just wasn't much of a factor this season and I had definitely ranked him too high as well the last time around, so it's not even all his fault either.

I still love his unique passing displays (I think only Andrea Pirlo averaged more accurate long balls per game last season), but I have probably overlooked shortcomings defensively in the past, which goes like hand in glove with his 2009/10 update:

The key for me when ranking Huddlestone is how good or bad he is defensively.

The rest of his qualities I'm aware of. Not least his truly unique passing. But a central midfielder must be good defensively, whether it's ball winning or more importantly work-rate and that how that's going into the team defending through pressing and/or positional discipline.

And I'm really not sure if he is good or bad when it comes to those things.

That he plays for Redknapp's very attacking Tottenham where his midfield partner is usually an attacking midfielder doesn't make it easier to decide.

They will push a lot of opponents back for good periods of a game but it does tend to go into not very controlled back and forth action with chances for both teams and maybe a little bit too much variance for what is usually the better team (that would be Spurs) on paper's liking. Or should be anyway.