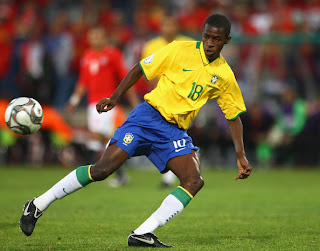 First time I saw Ramires for Brazil I noticed what you usually notice about Brazilian players, some nice technical skills.

Then I was impressed by his running and how it looked like he fulfilled his defensive duties on the Brazil right wing quite well. There was definitely stamina and plenty of raw athleticism as well.

In the meantime Ramires made the move to European football joining Benfica and as the hype surrounding that team and its success started spreading, with Ramires a part of that (though a smaller part than teammate Di Maria), I was pretty sure Ramires had to make the list.

Not hurting either is my growing suspicion that roughly speaking it's Ramirez physique that Dunga will prefer for the World Cup over Elano's technique for the starting Brazil right central midfielder spot, but we shall see.

Less encouraging was when I watched Ramires against Liverpool over a couple of games where he didn't really impress in either of the two.

The work rate was definitely there but the technical skills didn't look as good as my earlier impression and not all that much dynamic play came from him either.

Still the suspicion of a very good player is just too strong. I've seen physical and technical ability. Two-way play and the impressive versatility meaning he can play different midfield roles.

Ramires made a big money move to Chelsea where his contributions were needed immediately.

Despite what some formations will look like he has almost exclusively been used as a central midfielder and while I think it's fair to say that at times there have been classic English Premier League adjustment issues bordering on culture shock, I also think that almost everything that he is doing well is being completely overlooked.

For starters his engine is nothing short of incredible. The "Blue Kenyan" as he is called in Brazil couldn't be more fitting. This is a long distance runner playing football. I'm not sure I've ever seen anyone run like that and show so few signs of fatigue, if any at all, ever.

Generally I think he has been doing a solid (would be outstanding on lesser a team) job both when it comes to defending and passing but it seems people expect even more. Like attacking contributions. Especially in time of crisis when it's not coming from the usual sources.

I'm not even sure Ramires even played this kind of central midfield role in Portugal (maybe Brazil) and at Chelsea making forward runs hasn't looked like it's really been part of the plan. I'll also question what kind of effectiveness he can have going forward when central in narrow space (this is not Lampard) and when it comes to attacking contributions, while not necessarily flashy, I have more belief in him doing a two-way job out wide.

Maybe when Chelsea's final third play picks up again, via the usual suspects (by the way this slump has really highlighted the always taken for granted qualities of Frank Lampard), people won't blame Ramires for only doing what he is very good at and realize they're actually seeing one of the best midfielders in the world in action.

The only concern I have when it comes to Ramires is that his small size, which given that he is also strong and quick and can handle himself, would probably be a positive in any other league, but in the Premier League where the rules are different than anywhere else, it might be that he'll be non-called fouled enough to lose the ball where you just can't and at times be a liability.

In many ways that's part of the aforementioned adjustment he'll have to make though and I definitely expect him to overcome the adversity.
Indsendt af Stefan kl. 02.11