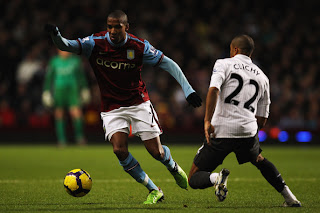 Ashley Young made the PFA team of the year both in 2008 and 2009 but after an inconsistent 2010 wasn't particular close this time around.

Just like the many previously ranked players of his type, difference making speed is his main weapon and he has good dribbling ability.

He is ranked ahead of all of them so far cause I feel he is a little bit more of a complete player or with a better trackrecord.
He is good in second-striker type of roles as well, and at least until this season, was a very consistent weapon creating and scoring goals through effective crossing and shooting. Better (even much better) than most of the wingers ranked so far.

In true Martin O'Neill Aston Villa style he also has a good work-rate but could improve creativity and short passing.

New Aston Villa manager Gerard Houllier recognizes that Ashley Young is his young team's best player and has given him the responsibility of being the focal point of their attack and in many games moving him away from his previously most common wing position and instead central behind a striker.

How much of that is belief in Young being able to effectively shine in that role or how much is the lack of belief in Stephen Ireland, the player bought for that role, is a good question.

There is no doubt Aston Villa would have liked to score more goals but I think by large their attacking midfielders have done as good a job as you can expect. Not just Young, who is still not really creative but with better teamwork these days I think which is something, but also the talented and already very good looking winger Marc Albrighton, have been playing very well.

It's more up front that there is serious underperforming resulting in real scoring drought and further back where an often young midfield (that Houllier still seems undecided on) lack previous seasons consistency and rarely find control of their matches.
Indsendt af Stefan kl. 02.50