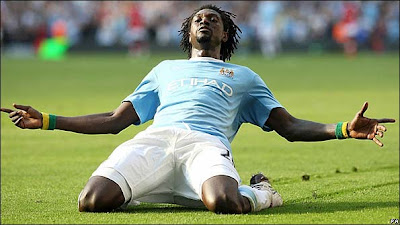 Definitely talented enough to be ranked even higher.

He is blessed with physical and technical tools to such an extent that it puts most other strikers to shame and that elusive excellent size/technique combination that I think is so valuable, alone almost should ensure a better ranking.

However his work rate and especially team work with and without the ball, making the players around him better with passing and not least movement is at best uneven, and pales in comparison to higher ranked similar talented forwards.

For me personally I thought this was nicely illustrated in how the club he left, Arsenal, looked for much of the year now without him. With his physique and technical capability in many ways Adebayor looked like an ideal center-forward on a team like Arsenal who controls possession but it quickly became surprisingly clear that without him up front there was suddenly both better movement and team work. Players complementing each other instead of, to put it rather harsh (it's not like there weren't good times too) just Adebayor himself.

For Manchester City it's been similar. There have been games with great individual performances from Adebayor. Full of impact. Not least the infamous game against his former club Arsenal but also plenty where it has looked like he was doing more harm than good with poor attitude and a work rate left seriously wanting.

With teammate Carlos Tevez in the lone centre-forward role as well performing much better than Adebayor it will be interesting to see what the future brings.

I'm sure he will still get games should he stay at Manchester City but it has become pretty clear that in a standard 4-2-3-1 at least, it's not really worth "sacrificing" Tevez into a further back forward (certainly not wide) role just to make room for Adebayor. For someone even better though, well maybe!

In theory him and Tevez could still work great, and did at times, in more like a 4-4-1-1 with Tevez behind in more of a free role, where I think he is great, but with Manchester City rapidly bolstering their lineup, an excellent player like David Silva also is now on board who in recent years has played a more or less a free role behind a striker (rather than as a wing).

New (Mario Balotelli) and old (Robinho) could also still make their way making starting attacking places even more elusive but at least until Roque Santa Cruz is sold (Mark Hughes always willing) and Balotelli not bought yet (still with something to prove as a centre forward anyway) he should at least be first alternative to Tevez as the man up top.

No, he has since that writeup managed to underachieve enough in order to not even be the first alternative to Tevez anymore.

Tevez of course has his own destructive situation brewing at City, but for Adebayor at least it seems a simple case of manager Mancini simply having lost remaining confidence in Adebayor adding any value to the team.

If things go very wrong with Tevez who has requested a transfer, for an example him not playing and no great replacement coming in, they could be forced to look to Adebayor once again, but ideally they'll look to get rid of him in January already.

High wages and all, can they find a taker?
Indsendt af Stefan kl. 10.31